Eibhlín Gráinne Wills was born at 9:29am on Thursday the 19th November 2015 in The National Maternity Hospital by an emergency C-Section. She weighed a healthy 7lb 11oz and was 9 days overdue. After birth she was sent to the Neonatal Intensive Care Unit (NICU) as a precautionary measure as she had become a little distressed prior to delivery. All was well and after 5 nights in hospital she came home with us on the afternoon of Tuesday 24th November. We were finally a family and the excitement and anticipation of this new bundle of joy started to set in as we began what we thought would be a normal journey as parents.

From the moment she came home she was such a little joy, so placid and relaxed and for the remainder of that week seemed to settle into her own routine quickly. She slept, fed and toileted perfectly. She had a high level of alertness for such a young baby and would look around wide eyed when awake taking in whatever shapes and movements she could see. On Friday of that week she had her first visit from the Public Health Nurse who examined her and went through the usual things with us. All appeared well and on the Saturday we decided it was time for her first outing in the car to see Granny and Grandad.

Most of the weekend went without incident as she fed and slept perfectly. On Sunday she was a little out of sorts, so we decided to stay in with her. By evening however she hadn’t taken as much bottle as before and that night she was difficult to settle. However with a little cuddling and rocking she did settle and by Monday morning she was back sleeping well. As the day went on it appeared she was a bit congested as if she had caught a cold. She was not distressed in any way but a bit more clingy than before. Other than this she was still her usual self-pulling funny faces for photos, and telling us when she had enough milk! As the evening went on she rested and all remained fine until approximately 11pm that night. She appeared very tired, just too cooperative at nappy time, so as first time parents we had granny come up to check in on her for some advice. Her conclusion, like ours, was that she was a bit out of sorts, and we should bring her to the GP in the morning 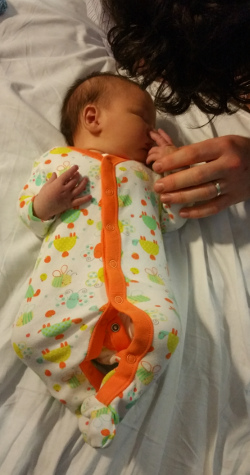 , however within a couple of minutes her colour changed in front of our eyes and she became listless.

With that we headed to Tallaght A&E and upon arrival she was immediately taken in. Within minutes a crash team was called and before we knew what was happening they were “working on her”. This is a term you never want to hear but it was the reality of the situation before us. Eibhlín was pronounced dead at 1:09am making it a week to the day since she came home. She was handed to Louise and I wrapped in her blanket with her little eyes closed.

We now know that the cause of death was the Herpes Simplex Virus 1 which is more commonly known as the Cold sore virus. In Eibhlín’s case it was Disseminated Neonatal Herpes Simplex Virus 1, which incubates for a time and results in multiple organ failure but it remained asymptomatic until it was too late. By the time the symptoms were evident it had (according to the post-mortem) devastated her bowel and liver. While this type of death is rare it is even rarer in Eibhlín’s case as 90% of these infections come from the mother. Louise has been tested and found not to have carried the virus. Therefore we know it was contracted postnatally very soon after her birth. While we may never know from whom, or exactly when Eibhlín contracted the virus, we know from tests results that the virus was already in her systemwhen she came home from the hospital.

We are sharing our story in Eibhlín's memory so we can create awareness about the dangers of HSV/Cold sores and neonates. It also serves to educate people as to what they can do to limit the risks of such infection as well as highlighting our wishes for change going forward.

Thank you for taking the time to read Eibhlín's story, and please share her website, to promote education and awareness.

In the pain of giving birth,
We waited for you to come into this world,
With awe and wonder in our hearts.

Then we held you in our arms and cried.

In the pain and fear of impending death,
We watched you go out of this world,
With shock and disbelief in our hearts.

Then we held you in our arms and cried.

In the pain and fear of bereavement,
We've searched for you in this world,
With anguish and grief in our hearts.

Then we held the memory of you in our arms
And cried... and cried.